Looking for a way to quit your job and write full time? The tiny house movement may be the key.

Bloggers and freelance writers across the US are turning to minimalism and its sister movement, tiny houses. They’re embracing this not-so-new concept of tiny life. Why? It’s freedom. It’s fun. And it quiets a lot of the guilt that trails consumerist culture.

But more important, it solves that financial issue that keeps artists and start-ups and upstarts and writers everywhere in jobs they don’t love. And now they’re quitting their jobs to pursue their passions. Want some of that action?

Here’s how to quit the cubicle and pursue what really matters.

What Is The Tiny House Movement?

The tiny house movement is a social movement. One that advocates a return to simple living in smaller homes.

It’s a response, maybe even a backlash, to US American consumerism. Because after the recession, people  started asking why they worked so hard for so little. Why slave for the house? Why work long hours while strangers raise our kids? Why? When we lost the houses anyway. Was it—is it—worth it?

George Bush’s infamous advice to Americans after the 9/11 attacks was to keep shopping. He commercialized our community anguish. Showed us that we’re really just commodities in a perilously fragile bubble of a system. And the worst part? Bush was right.

Does our survival really hinge on the trifling purchases that make our lives so empty? The question doesn’t surprise us anymore. It’s hum-drum. A fact of life. Our eyes glaze when we read the word. Consumerism. This is our economic reality.

Except maybe now it doesn’t have to be.

Because maybe tiny houses are the solution to that economic reality. A simple “no” to the inflated square footage. To the oppressive mortgage that cements us to long hours working for someone else’s dream. Maybe now we can spend more time with family, instead of paying for someone else’s kid to go to college.

Either way, tiny houses are a godsend for writers and artists. Here’s why.

Ours is a world in transition. This is living history. You’re watching the great Technological Revolution reshape the world as we know it. What’s going to change in the coming decades?

Well, work life for one thing. The Industrial Revolution brought men and women from the fields and into the factories. That meant lots of people in one place. That meant tenements. Shared housing. Urbanization. This was a nation fixed to one geographic place: wherever the factory happened to be.

Now, though, technology is changing that landscape. People are more mobile. You can work with your team by Skype. The Cloud. Remote applications in real time. This is the future of work.

More, 3D printing may hobble around on unsteady legs like a baby calf. But it won’t be long before anything you need can be printed. Factories will decline. Soon only food producers will be stationary.

That’s the future. Where “community” doesn’t mean proximity. And work is all online. For now, though, that’s a luxury for the lucky few. If you’re a writer, you’re one of them.

Because writers don’t need a fancy office. Sure, an office is nice. But if you’re freelance, or a blogger. If you deal in ideas. You don’t need a giant house. You can instead be mobile. And maybe this shift in mindset means you can finally pursue your dreams.

That’s where a tiny house make so much sense. Why?

Writing takes time. It’s work. And since it doesn’t pay too well at first, tiny houses solve a huge writer problem. Because what do you do when you need to pay bills but all your work time is spent on something that makes so little money?

For writers like Tammy Strobel, tiny houses mean the freedom to quit your job and pursue writing instead.

Tiny Houses Save Writers Money In More Ways Than One

Dee Williams, one of the first proponents of tiny living, built her tiny house for $10K. When the average house in the US costs upwards of $313K, you start to see the sense in tiny living.

What does that mean for writers?

It’s no secret that pursuing your writing dreams can sometimes come at a cost. And not every writer pulls in Stephen King’s $17 million annual or Danielle Steel’s $23 million. So how do you cover the cost of living when you spend your work hours on a passion that doesn’t always equate to career earnings?

Well, it turns out that life isn’t really all that expensive. Consumerism, and the inflated mortgage, just makes it feel like it is.

Because not only do you save on that mortgage, with a tiny house you also save on heating and cooling costs. Housekeeping. The insurance premiums you hemorrhage on junk items you don’t need. And that doesn’t even touch the true gain: all the time you save.

And that’s where extra money comes in with a tiny house. Because you can use those extra hours on writing paid reviews, freelance editing, or an extra short story. And that’s just a few ideas.

What would you do with all that extra time?

Tiny House Are Mobile, So Travel for Inspiration and Writing Opportunities Is Easy

Need some writing inspiration? Take that tiny house on the road. Most of them are built on trailers to skirt inapplicable building codes. That makes most tiny houses mobile.

Can you imagine what it would be like to write and travel full time?

Writing a story that takes place on the beach? What better way to translate that salt water, sand, and cool breeze onto the page than to live it while you write?

Or meet up with another writer a few states away. Record an instructional video with him for your fearless blog.

If you start thinking this way, the possibilities are endless.

Where to Get a Tiny House

Lots of people simply build their tiny houses themselves.

Before the Industrial Revolution transformed the US into this urbanized, mortgage-and-industry-dependent economy, most people built their own houses anyway. And these days, it’s really just the size that makes the idea so daunting.

But with a tiny house, building’s not as hard as you might think. And it’s getting easier.

When tiny housing first started out, intrepid builders had to find their own trailers. Trailers that weren’t made to have houses strapped to them. That meant a whole lot of retrofitting. Finding welders or doing it yourself.

Now, though? You can buy a tiny house trailer that’s ready to go. You can buy building plans, attend a workshop, or register for tiny house construction classes.

The movement is so widespread now, you can even buy tiny houses second hand as people upgrade or build new ones.

Need more info? There’s a list of resources at the end of this page.

Stuck In a Mortgage?

You’re not the only one. We all believed that buying a house was the first step toward financial adulthood.

But with the economic bust and the housing market’s crippled dive into oblivion, many wised up. For some, though, it was too late.

Sure, the market’s in upswing. But if you’re one of those stuck in a house you don’t want because no one else wants it either, you can still take advantage of the tiny house benefits for writers with a backyard writer retreat.

In coming years, this tiny house movement will sound even less crazy. And it’s already solving problems for writers.

Book Giveaway: Win a Copy of This Tiny House Book 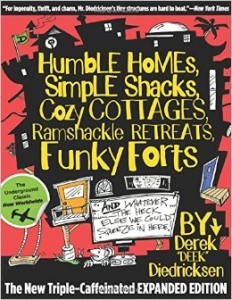 The constructions in this book aren’t representative of tiny houses. And they aren’t exactly high-end either. But it’s fun, whimsical, and will get you thinking of the tiny house possibilities.

Or it’ll scare you shitless about the tiny house movement because you didn’t read that part about it not being representative. Either way.

For a chance to win Diedricksen’s book, answer this question in the comments: What excites you most about the tiny house movement?