“I hate musicals,” I told him.

We were chopping veggies for a roast, the husband and I. He gave me a sidelong look that said I was probably too dumb to be wielding a kitchen knife.

“Fine, name some of your favorite movies.”

“Ok,” I said. I have a lot of favorite movies. “Pulp Fiction. Moonrise Kingdom. The Professional.”

Know what I hate besides musicals? Fantasy fiction.

Swords and dragons and magic? Get real. The princess doesn’t get rescued by the wealthy prince. She gets knocked up and left with the dragon. And then, somehow, that turns into a student debt bubble that follows her post-baby fat ass to the old folks home.

Ok, I can already hear him…

“Mandy, name some of your favorite novels.”

Fine, Nathan. I will.

#1 Lives of the Mayfair Witches

Don’t get me wrong. I loved The Vampire Chronicles as much as the next vampire-wannabe, but Lives of the Mayfair Witches changed my life.

That’s a stupid thing to say about a fantasy series, I guess. Except that it’s true.

If you read this epic chronicle in high school, like I did, you’ll know that a gender-barrier-crushing, sexuality-exploring, existence-pondering saga can make you question everything you thought you knew.

From sex and sexuality, to the meaning of “feminine,” and how much I could expect from life as an intelligent, independent woman—these books changed my perspective for the better.

Plus, there’s great sex and historical detail. Can you ask for more?

Don’t think Lives of the Mayfair Witches is fantasy? Maybe I’m not the only one with a fantasy fiction prejudice. Magic and the supernatural? Check and check.

#2 The Chronicles of Narnia

My first response to The Chronicles of Narnia? “Best damn stories ever.” (Yes, I talked like that when I was nine. Just not out loud.)

And I’m still almost too ashamed to admit that the story’s parallels with Christianity seemed like God reaching out to affirm the religion. But I also thought grandma knew God’s phone number back then, so that tells you a little something about my connection with reality.

#3 The Song of Ice and Fire

Does George RR Martin’s Song of Ice and Fire series even count as fantasy? I mean, it’s just too easy to suspend the disbelief. These characters respond to magic so realistically, I never think to doubt its existence.

I walked past this book and its author three times. Three times. The author sat there signing free copies. And I still turned up my nose.

This was at the 2008 American Library Association conference in Anaheim, where Rothfuss was accepting an Alex Award.

My only excuse for almost missing out on one of my favorite books of all time is that I was convinced I hated fantasy fiction.

But my husband loves fantasy fiction, and he knows it. So—even though I was exhausted from how-to panels and interactive workshops and keynote speakers—I finally picked up the book.

I only wish I could have known then how much I’d love The Name of the Wind because I would have fangirled all over Patrick Rothfuss that day.

Lucky for him, I can’t tell the future.

At home, The Name of the Wind went into a box of unread books (no fancy bookshelves back then), and we both forgot about it.

Fast forward six months. The husband and I are packing for our study abroad trip, and we need reading material for the flight. We have yet to learn that whole “pack light” concept, so we throw in a bunch of books. The Name of the Wind was one of them.

So there I am a month later, crying in the shower of this podunk German town called Horb, because I hate German food and I hate our mean home stay family mother who yelled at me in German for not studying enough, and I’m pretty sure at that point that I could never love anything that has to do with anything German (Of course I fell in love with Germany later. Much, much later.). So, in an effort to make me just a little bit happy again during my culture-shock/existential crisis, Nathan reads me The Name of the Wind.

And I stop crying so I can hear it.

Epic. Can I just say? Poetic prose. Razor-sharp control over the English language. It’s more than fantasy. It’s surprising and compelling and moving. An instant favorite.

I reread The Name of the Wind every year and pine like an unpopped bride on the edge of the sea, waiting for Kvothe’s next appearance.

Okay, let me be clear. I still hate this series.

I know, I know. Who could hate The Lord of the Rings, right?

Let me tell you a little story.

So I was in fourth grade GATE class. This matters because in GATE classes, you get a lot more freedom to do your own thing. Well, not a lot more. But enough that, if you’re reading a book under the table when you’re supposed to be watching President Clinton’s inaugural address, you probably won’t get yelled at. As long as you don’t make a scene.

The book under the table? Definitely not The Lord of the Rings. It was The Lion, The Witch, and the Wardrobe.

So there I am, on an adventure, minding my own business, when the boy sitting across from me barks out a laugh. Every head in the class swivels to look at us. Well, they look at him, but I’m worried they’ll tattle on me too.

President Clinton goes on about whatever presidents go on about. Talking out of a boxy tv set strapped to a rollaway cart. If you’re a 90’s kid, you know what I’m talking about.

I shove my book under the table a little further and squint at Clinton’s face like it’s the most interesting thing I’ve ever seen. As though to say don’t mind me, I’m just doing the assignment.

“Is everyone taking notes?” Mrs. Williams chimed from behind a stack of papers. So, of course, everyone pretends to scribble notes and forgets about the two kids who aren’t paying attention.

I sneak a look, and the boy’s staring at his crotch and grinning. I know his dirty little secret, because I’m doing it too. Reading a book in my lap under the table.

I lean over when the coast is clear.

“What are you reading?”

He looks at me sideways. I know that look. It’s the why-are-you-bothering-me-when-I-have-a-book-in-my-hand look. But that just makes me more determined.

He sighs and shows me the cover under the table. The Hobbit. Some old fashioned thing with a dragon in a cave. The kind of thing a boy would like. But I guess I could try it.

“Nice.” I say. He rolls his eyes. But then he looks at me funny.

“What are you reading?”

I’m sure my eyes went wide. I thought I was so sly back then, and he’d seen right through me. But I show him the cover anyway.

“That book’s stupid,” he said, and went back to reading.

Ha! If he had taste that bad, his book must be awful.

I didn’t like the boy, so I didn’t like his book. And I didn’t try The Hobbit again until my husband insisted on it, ten years later.

The husband: “I grew up on this. It’s excellent.” He rereads The Lord of the Rings series every few years. So I tried The Hobbit with a newfound respect, and…

I still hated it.

With some stories, if you miss out reading them as a kid, you simply miss out. Their lasting power has a lot to do with nostalgia. And with The Hobbit, I just don’t have any.

So now, every time the husband rereads them, I get a little pouty because I’ll never feel for those books what he feels.

I hate being left out. 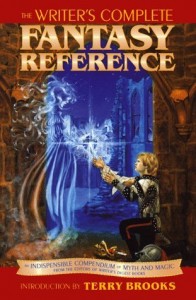 Share your favorite in the comments for a chance to win a copy of The Writer’s Complete Fantasy Reference from the editors of Writer’s Digest books. [Giveaway now closed. Congratulations to Rick.]

Previous Post: « What I Would Say to Hemingway
Next Post: The Writer’s #1 Source for Dazzling Story Details (Hint: It Isn’t “Experience”) »