This Formula Solves The ‘Show, Don’t Tell’ Writing Dilemma Once And For All

So I’m working on this short story I started for some Glimmer Train contest or other. But it grew like a weed all unwieldy, and now it’s burst through its word count limit and its deadline. And I wish that was this story’s biggest problem.

Its biggest problem is that I’m still struggling to balance ye old show versus tell rule, and it’s got me so micro focused on each passing second and every minor character thought and gesture and useless detail of the environment that it’s all just TOO MUCH INFORMATION!

As much as I thought you and I solved this show, don’t tell rule once before, it’s turned out to be a tougher trick to master. But we both know that learning a lesson doesn’t always work in real life the way it does in stories (i.e. one and done). That’s why I’m so excited to share the formula that finally balances all the confusing show, don’t tell info out there.

I found this solution because I’d  gotten so fed up with fighting my way up this shit mountain of a writing problem that I quit writing (temporarily!) and read a book instead. Thanks to the writing gods I picked up just the right one.

Enter Joan Didion’s midcentury classic, Play It As It Lays.

Balancing ‘Show, Don’t Tell’: Lessons from Joan Didion’s Play It As It Lays

Play It As It Lays is the famously nihilistic story of a woman trapped in the ennui of modern society. It’s a quick read. I devoured it in two insomniatic late night reading sessions last week as I was banging my head against the wall trying to transform my tiger stripes from night person into day person (it’s a work in progress).

Part of what makes this book a quick read is that each chapter is rarely longer than three pages. Many of them are just a paragraph. And the paragraphs, too, are just a few sentences long. It’s like a blog post in book form. Well, maybe not like my generally hefty blog posts, but whatever. I write short paragraphs to make them easy to read off a screen. I get credit for that 😉

So the text on every page of Play It As It Lays just sort of floats in all this whitespace. It resembles the white noise of the main character’s emotionally numb mind or the emptiness of her cold, dead heart. Harsh? If you’ve read the book, you may agree with me. (I still loved the read and feel for the book’s main character, although I may be alone in this.)

But this isn’t a book review. This is about the other thing that makes Play It As It Lays a quick read, which is the same thing that solved my little too much showing problem.

Joan Didion is a master of brevity. She gets in with the quick strokes that paint the barest necessity of scene detail before she’s off to the next chapter. And I needed this powerful skill to solve the excess of minutiae in my current work-in-progress. Here it is in case you need it too.

An Example of ‘Show, Don’t Tell’ Balance in Action 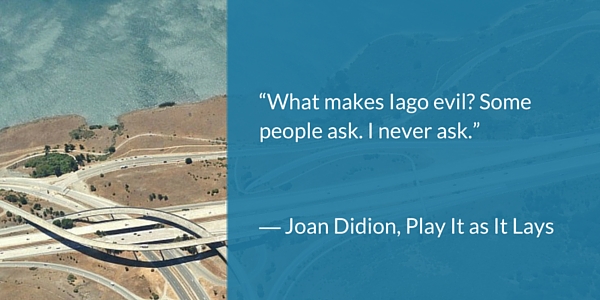 “I’ve got news,” Freddy Chaikin said after the waiter had brought her Bloody Mary and his Perrier water.

See that? We know they’re in a restaurant because there’s a waiter. And we can start to guess at their character and class background because of what they drink.

But the beauty isn’t in the show, don’t tell mastery here. It’s how efficiently and quickly Didion pulls it off.

She draws us in with the “I’ve got news” line, and we immediately want to know, what news? She establishes setting with the detail about the waiter. She tells us we’ve got at least two characters because one is talking to the other. And we get a sense of character because we know they dine out, particularly in places that serve Perrier water.

Here’s the lesson in a few key steps (notice how they balance each other).

The ‘Show Don’t Tell’ Formula in a Few Key Steps 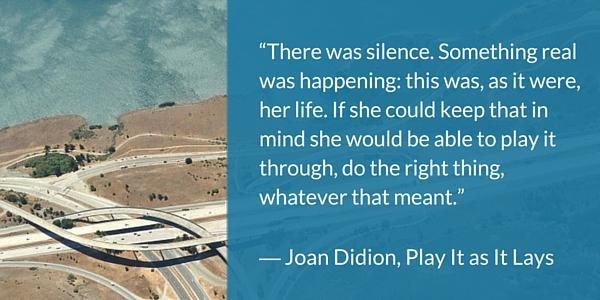 Write with Specificity. If you use concrete and sensory details to build your scene, you’ll never have to worry you’re telling more than showing. Didion tells us what exactly each character is drinking because 1. it reflects character, 2. the concrete detail makes the scene feel more real, and 3. it orients the reader in the setting by cluing us in that the characters are in a restaurant.

Brevity keeps specificity in check. Specific and real are what the show, don’t tell rule is all about. But notice how Didion, in those two simple sentences above, doesn’t wax on about the restaurant once the reader knows that’s where the scene takes place. She gives us just enough to orient us in the setting. Every sentence she writes either builds character or advances the plot. The lesson for writers who want the same: cull anything that doesn’t.

Let POV balance the two principles. Brevity is a sliding scale. What feels like just the right amount of detail to one reader or writer feels stark and arid to the next. That’s okay. It’s up to you as the writer to determine what makes sense for your story. Didion’s Play It As It Lays revolves around an emotionally numb and ultimately selfish character. So it makes sense that a story from her POV wouldn’t focus as much on other people or what every environment looks and feels and smells like.

But maybe your character loves the physicality of being in her own body, so you would include details of what it feels like to move and stretch. Or maybe your POV character is a botanist, so you’d include a lot of sensory details about a stroll through a botanical garden. The key is always to include the details as filtered through your POV character, and choose only those details that build character or advance plot.

Use principles of filmmaking to skip the boring parts. Those French New Wave cinema techniques for writers support Didion here in that she’ll pull the lens back sometimes and skip time or zoom in and out on the action or into and out of a character’s head. Often times, Didion opens with dialogue in a scene only to jump to a week later in the very next paragraph.

We don’t have to follow the characters with a microscope and report their every moment-by-moment thought in a single scene. Sometimes it’s better to paint impressions instead of document the closeup play-by-play.

So the formula to keep show, don’t tell active but in check is: specificity + brevity + POV-appropriate details that build character or advance plot.

The Takeaway for Writers 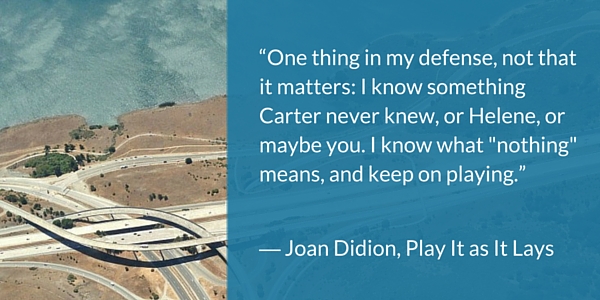 Now that I have this formula as a baseline, I know I’ve been listening too much to the people who think my story needs more setting and detail. Because I LOVE Didion’s Play It As It Lays. The style, the lean prose, the concept and mood—it all just works for me.

And now I feel empowered to go with my gut on what’s right for the story I want to tell. You and I can move forward with our writing knowing that it’s okay to write however spare and lean and stark (or the opposite) if that’s what our gut tells us to write. We just have to find the kind of readers who dig that too. Because if it worked for so many successful writers, why not you and me?

May neither of us forget this lesson again <3

What about you? Made any writing breakthroughs this week? Struggling with a writing problem and waiting for that breakthrough? I’d love to hear about it in the comments. We’re in this together.