(A free worksheet is included below. Don’t miss it!)

I could pull up to his window like I’m parallel parking and just sort of chuck my sandwich at his driver side door and speed off.

No, that’s no good. I’d probably hit him by accident. He’d be so miffed at having mustard on his chin he’d charge me with assaulting an officer just to make a point.

Okay, fine. But what if I drive by really, really slowly and pull a gangster face, and then speed away? He’d chase me, surely. So I open my visor mirror to test out some gangster faces.

I scrunch my nose and snap the visor shut.

It’s 12:45 on a weekday. I chew on my sandwich and look around. People chat over lunch at outdoor tables. Couples cross at the crosswalk.

I don’t want anybody to get hurt, of course.

Maybe I can get this nice officer to pursue me at fifteen mph? Then no one gets hurt. And maybe I avoid the reckless endangerment charges.

“Hands on the vehicle, ma’am. Carrying any weapons?”

“Just my pen, sir.” (He probably wouldn’t get this joke.)

“You have the right to remain silent.”

“Officer, can you keep these notes safe?”

“I said hands on the vehicle, ma’am.”

“I wrote them for a story scene, and I don’t want them lost.”

“You wrote these while driving?” (So much for avoiding that reckless endangerment charge.)

The officer, the real officer, finishes his sandwich. He crumples the wrapping paper into a ball, tosses it out the window where it lands on an overflowing trash bin. His aim is better than mine would be. He speeds off, and with him go my hopes of writing a realistic chase scene.

You know something’s wrong when you consider jail time just to get a story written. 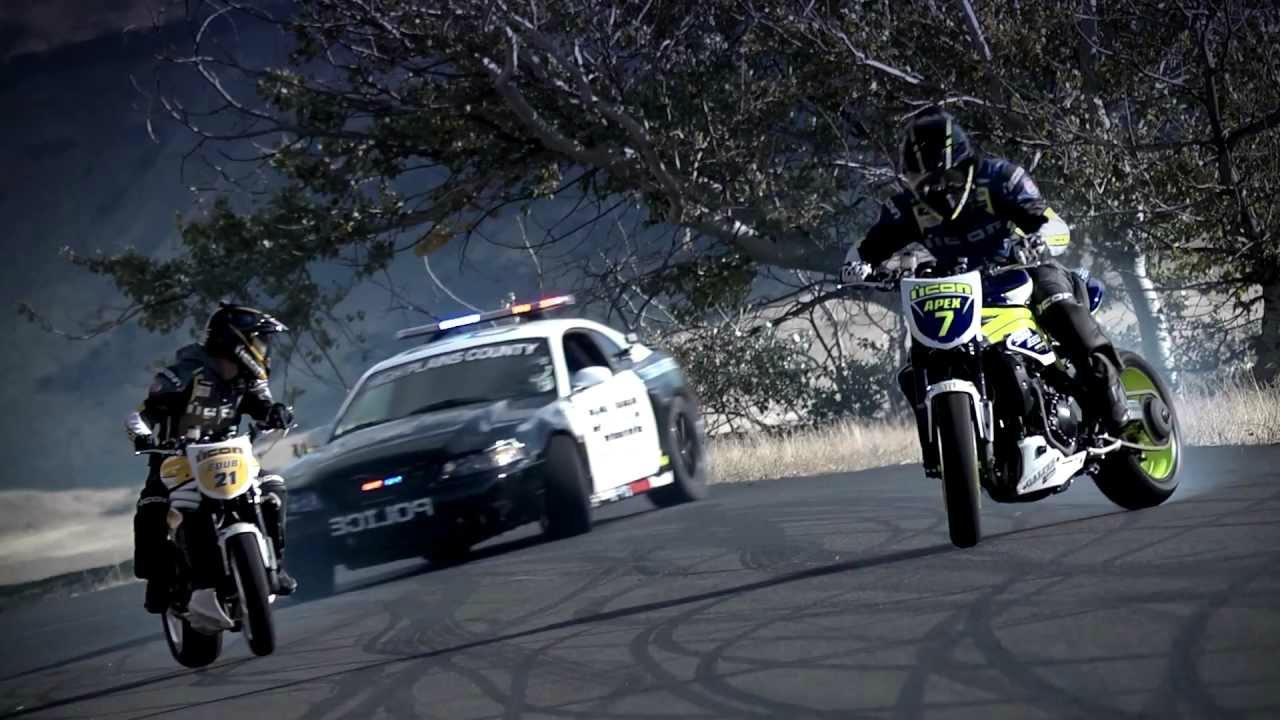 Why would this crime-averse gal ever consider criminal charges?

The main characters in of my stories finds himself in conflict with a local biker gang. They’re outnumbered, outgunned, and completely out of their depth. So what do they do? They run. Which is great. But I’ve never been in a car chase. So how could I write one?

It was an unsolvable problem. But I couldn’t bow to defeat. The contest, my publishing dreams, hell the story alone was too important to give up now. This is my dream, we’re talking about!

Ready for the solution? It’s the secret to writing stories so rich in detail, no one would guess you didn’t live them. No jail time necessary. (<– So important!)

If you’re anything like me, your characters get into shenanigans you wouldn’t approach with a bullwhip and twenty inches of steel armor. So forget “write what you know,” because with YouTube you can write what you want and still have the details to support it.

Type “car chase” into YouTube’s search bar and a million experiences appear at your fingertips.

Be warned, YouTube isn’t all fluffy bunnies and cats playing the piano. What you see might disturb you. The video below isn’t some high production movie shot on safety rails in HD. It’s real life. And these men really get hurt.

It’s worth examining, though, for several reasons. First, it unfolds like a movie with a beginning, middle, and end. Second, when it presses all your instinctive buttons you know without hesitation which details to include. Third, it reminds you how quickly minor scrapes combust into life-threatening ordeals.

Your characters make stupid decisions like people make stupid decisions. In this video, the Range Rover driver thinks he’s safely anonymous on a busy freeway. The bikers think they’re safe in a pack. By the end, both parties realize how wrong—and how vulnerable—they really are.

Watch the video and then join me after to find out how you can transform videos like this into story scenes so rich in detail, your readers will think it happened to them.

How to Transform YouTube Videos into Detail-Rich Stories: The Step-by-Step

Step One: Have Fun

What kind of scene are you writing? Type that into YouTube’s search bar.

Get creative with your search terms. I tried “motorcycle chase,” of course. But I didn’t hit pay dirt until I branched out to “biker gang car chase.” Try a few things until something clicks. This step is more art than science. And that’s reason enough to have fun.

What’s better than watching videos on YouTube and calling it work?

You’ll know you found The One when one of two things happens.

At this point, grab your notebook or the free worksheet below and start writing. Be ready to hit pause so you can jot down the play-by-play. Here’s what to write down.

How to Organize Your Notes (The Easy Way) 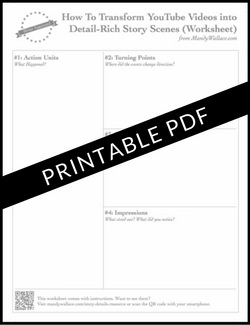 Print the free story details worksheet to make this even easier.

Create separate sections in your notes for: action units, turning points, sensory details, and impressions. Or print the free worksheet above. The sections in this worksheet are already made for you.

No need to get fancy in this section. Just write down the facts.

Easiest is to write a numbered list. #1: This happened. #2 That happened. Each number on the list should be its own unit of action on its own line.

Examples of Action Units in The Biker Chase Video

My notes from the biker gang chase look like this:

Highlight the turning point moments in your list. They’re easy to find if you look for where the story changed direction or meaning. These moments are of vital importance because they are your plot.  They’re the moments of greatest drama and suspense. And they’re the moments that you, the writer, must focus on in detail. This is where the magic happens in fiction.

Examples of Turning Points in The Biker Chase Video

In YouTube videos, you get sight and sound. That’s a great start. But don’t stop there. Sights and sounds can help you intuit other sensory information.

Also ask yourself what new elements look and sound like when they enter the camera frame. Here’s what I mean.

Examples of Sensory Details in The Biker Chase Video

This is where you write down anything that stands out. Associations you make. Themes, symbols, or motifs you might explore.

Impressions from The Biker Chase Video

Plug the turning points from step two above into your story to form a plot skeleton. Flesh out your plot skeleton with the details from steps one, three, and four. For each turning point or action unit you write in, include your characters’ reactions. What do they do, say, and feel? Write that down. You’ll weave these in and smooth them out when you edit your story later.

Yes, this video is real life. It happened to real people who really got hurt. That doesn’t mean you should feel guilty for transforming it into a story. Here’s why.

It’s your job as a writer or artist to find meaning in the chaos of life. To find moments of redemption in human suffering. To be the salve that helps people make sense of meaningless events.

But to speak to people—to reach readers’ hearts—you have to entertain them first. That’s the nature of stories. You give people what they want (entertainment), so you can give them what they need (meaning).

Did you grab your free story details worksheet?

Previous Post: « The 5 Best Fantasy Fiction Series of All Time (By Someone Who Hates Fantasy Fiction)
Next Post: The Worst Ginger Tea Recipe You’ll Ever Read (But The Taste Is Worth It) »